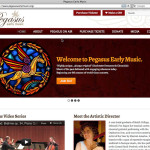 Most of my projects come from referrals but Deb Fox, the founder and Artistic Director at Pegasus Early Music, found me in an online search for local (Rochester) web developers. And I’m glad she did. Deb and her interns were great to work with and the redesign had some fairly complex functionality that challenged me, in a good way.

Pegasus Early Music is a non-profit whose performances “…encompass over 400 years of music – from medieval to romantic – played on period instruments.”

A large part of the motivation for the redesign was to move away from a content management system that was no longer supported by its creator and had been heavily modified to meet the group’s needs. Since the existing site had been around for a while, it was important to keep a lot of the great content that had been created, and indexed by search engines, over the years. But the site a slightly dated look that could benefit from a little facelift and a little reorganization of its content.

Pegasus Early Music fans can visit the new Media page to listen to clips or watch videos from a variety of Pegasus concerts throughout the years. Embedded Facebook and Twitter feeds provide at-a-glance updates of what’s going on with the group.

One of the trickier aspects of the redesign was reproducing the custom programmed ticket purchasing functionality. Each season, Pegasus Early Music hosts around half a dozen performances featuring a variety of different performers. Most performances are a one-time event but there are some repeat performances which give fans a choice of dates, times and even locations to see a particular concert. So it was important that any e-commerce solution be able to accomodate an event that allowed customers to choose between a handful of different options. To make things a little more complex, fans can also purchase a series subscription, which includes tickets to all the concerts in a given season. Again, the series subscription option would have to allow customers to choose between dates if a given performance was taking place on more than one day. Since trust and ease of use are large parts of any successful e-commerce effort, it was important to Deb that the ticket purchasing process be as simple and seamless as possible.

In addition to allowing fans to purchase tickets, the purchase functionality is also tied into a calendar feature. Any concert events that Deb creates are automatically added to a Concert Calendar area in the left-hand sidebar of the site that allows visitors to easily browse and see what events are taking place on a monthly basis.

Be sure to subscribe to my newsletter for tips on how to make your website work for you.

Don't worry, I'm protective of my email address too. It's safe with me.